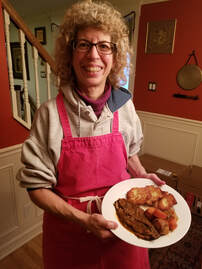 The problem with favorite holiday recipes is that there aren’t really recipes. I’ve been making these for 50 years. I learned how watching my mother make them, and we had this at least once every Chanukah. I did my best writing them out and hopefully they will be reasonably easy to follow.The brisket recipe has evolved over time, but at this point is close to perfect. The latkes, to the best of my memory, are pretty much exactly the way my mother made them when I was a kid.
Brisket
Note: DO NOT trim fat - you need it for good flavor. You can remove a lot of it when the brisket is done. This is best made 1-2 days before you want to eat it, and the instructions are written assuming you have done that.
Ingredients
Small Brisket (This will work for 2.5 pounds, you’ll want to adjust quantities for a bigger one).
Kosher salt
Fresh ground pepper
2 tablespoons vegetable oil
1 peeled clove of garlic, cut in half
2 onions, diced
1 8 oz can tomato sauce
2 cups of dry red wine
2 stalks celery, chopped - best to use stalks with leaves if they are available
1-2 bay leaves
1 sprig fresh thyme
1 sprig fresh rosemary
Chopped parsley - you want a good handful
3 large carrots, peeled and cut into chunks
3 large parsnips, peeled and cut into chunks

Directions
Preheat oven to 325° F. Rub the brisket with the cut side of the garlic clove. Save it for later. Salt and pepper it well.  Heat the oil until it shimmers in a dutch oven or other large oven safe pan with a lid. Brown the brisket well. Remove brisket to a plate, or stand it up and lean against the side of the pan.
Put the onions in the bottom of the pan, and then replace the brisket on top, with the fat side up. Put the tomato sauce, red wine, garlic, celery, bay leaf, thyme and rosemary on top.

Cover and bake in the oven for 2 ½ hours (more if it’s bigger), until it is almost tender. Every half hour or so spoon some of the sauce over the brisket. Stir in the parsley. Add carrots and parsnips, spoon the sauce over them. Replace lid, and cook for about 45 minutes more, until veggies are done, and brisket is fork tender.

Refrigerate. About an hour before you are ready to serve, skim the fat from the surface of the gravy. Remove the brisket, and slice against the grain. If desired, you can trim some of the fat before slicing. Put everything back in the pan, make sure the brisket is covered with the gravy. Reheat over a low flame until hot.

Traditional Potato Latkes
Note: These are made the way we had them in my childhood, grated, not shredded. To get the texture exactly right, you need to use a wire grater. Mine self-destructed a few years ago, and I discovered you can get very close using a food processor, so I never replaced it.
This makes about 14 latkes. Multiply for larger batches.

Ingredients
2 large russet potatoes
1 small, or half of a large, onion
1 egg - I usually have giant eggs in my house, and it works fine. But a large egg is plenty, even if you double this.
Matzoh meal - I’m guessing an ⅛ cup, but I’ve never measured
Salt and freshly ground pepper to taste
Vegetable oil for frying

Directions
Peel the potatoes and onion. Cut into chunks and place into the bowl of a food processor. Pulse until the texture is right. You don’t want any big pieces left, but you also don’t want to turn it into puree.

Pour into a fine strainer and squeeze out the water over a bowl. You can also squeeze it out in a clean dish towel. Pour off the water carefully, leaving the potato starch in the bowl. Pour the potato onion mixture into the bowl, and stir to mix in the potato starch. Add the egg, salt and pepper and mix.
Add a little matzoh meal, mix. If it looks too loose, add some more and mix again.
​
Heat a ¼” of vegetable oil in a frying pan until it shimmers. Drop about 2 tablespoons of the mixture in the pan at a time, and flatten with the back of a metal measuring cup, or a spatula. Don’t worry about them being perfectly round - any projections fry up extra crispy and delicious. Fry until golden brown, and then flip and fry the other side. Remove to paper towels or a wire rack to drain, Serve immediately.